Pickleball is a fun and fast pace game that is a combination of several classic games – badminton, tennis and table tennis.  It’s played on a badminton sized court, with a tennis like net that is 34 inches high and paddles similar to ping pong only larger along with a wiffle ball.  It is easy for beginners of all ages to learn but can develop into a quick, fast-paced competitive game for experienced players.

One great aspect of the game pickleball is that anyone can play this sport. People of all ages and athletic abilities will find that pickleball is a fun sport with straightforward rules. The game of pickleball has everything you could want and more! It truly is a great american family sport that you can play almost anywhere there is a court and friends to play with. 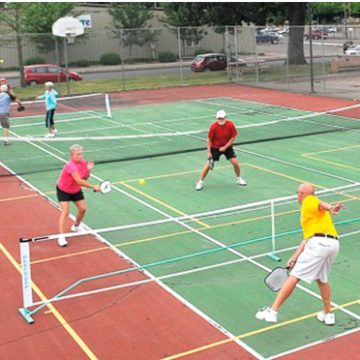 Check out this introduction video

Everything you want to know!

The year was 1965 and the original intention of the game was to have fun with family and friends around the summer vacation homes on Bainbridge Island, Washington. It was invented by 3 fathers that wanted to create a game for their bored children. The game caught on extremely fast and spread around the local area with friends and neighbors wanting to share in fun.  The adults enjoyed it as much as the children. Eventually, the game migrated to other locations around Seattle and from there across the country.

Some sources claim that the name "Pickleball" or "Pickle Ball" was derived from that of the Pritchard's family dog, Pickles, who would run after the ball that got away. Other sources state that the name came from the term "pickle boat", referring to the last boat to return with its catch.  According to Joan Pritchard, Joel Pritchard's wife, the name came "after I said it reminded me of the Pickle Boat in crew where oarsmen were chosen from the leftovers of other boats.

Today Pickleball is played all over the world and it is estimated that there are over 2 million players and rapidly growing. Its no wonder the media is constantly posting articles about this great source of fun and competition!

This video provides some history on the game.